In 1254, King Louis IX of France invited Henry III, King of England, to Chartres. This meeting was the first of a series of truces and negotiations that led to the 1259 Treaty of Paris, ending the conflicts of the 1st Hundred Years’ War.

This realization evokes this encounter by the sequencing of five animated paintings representing: The arrival of Henry III and his escort in Chartres. The reception of Louis IX and the exhibition of banners, the night celebration in honour of the sovereigns, followed by the great banquet. And to finish the realization of a painting immortalizing this meeting.

With illustrations from the Middle Ages and architectural lighting, the monumental façade of the 12th century collegiate church of Saint André is a remarkable support to tell this episode of Chartres’ history.

About the Saint-André collegiate church

In the Gallo-Roman period, an amphitheater stood at this site. There are some stones in the walls of one of the crypts. Several churches were built and destroyed between the 10th and 17th centuries. Since its renovation, the collegiate hosts various events.

Dating mainly from the 12th century, this collegiate church has been converted into an exhibition center. In the past, his choir rested on an arch spanning the Eure, prolonged by another arch crossing the street. The Saint-André collegiate church, a listed historic monument, has, as it has done every year for the last four years, a new colorful scenography made up of four successive dressings. 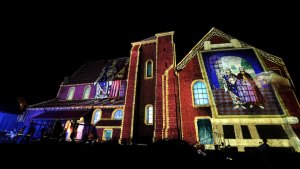